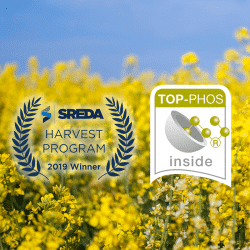 TIMAC AGRO Canada was among the winners of the “Harvest Program” 2019, an international competition held in Saskatchewan, Canada’s biggest agricultural province, which aims to highlight innovations and technologies with the potential to improve yields and future agricultural practices.

Our subsidiary won with its Top-Phos technology, earning an exceptional opportunity to showcase its work at the Ag in Motion event – the biggest agricultural gathering in western Canada (320 hectares – 50,000 participants), which will take place from the 16 – 18 July.

Making inroads in western Canada via our innovations

Organised by the Saskatoon Regional Economic Development Authority (SREDA), the “Harvest Program” features innovative companies whose technologies have the potential to contribute to improving yields and agricultural practices in Saskatchewan. This province, nicknamed “Canada’s breadbasket”, is home to 34,000 agricultural producers cultivating crops on 14 million hectares of land: primarily wheat and canola (a plant in the rapeseed family). This market represents a potential 3.5 million tonnes, out of the 8 million tonnes total on the Canadian market.

“Winning this Harvest Program award falls within the objectives we set ourselves for 1 year of our strategic development plan for Canada. In this vast market, in which TIMAC AGRO was relatively unknown, the aim was to demonstrate our international successes in terms that would resonate with the Canadian market, thereby equipping our innovations with technical credibility and visibility at the local level. This approach gives us a certain momentum for transposing our results on the ground, notably via commercial and industrial investments,” notes Simon Jolette-Riopel, General Manager of TIMAC AGRO Canada.

Indeed, winning the award is a major achievement in terms of recognition for TIMAC AGRO, as the affiliate was selected from among 24 candidates from 8 different countries, and was picked by a committee made up of members of research institutes, the provincial Agriculture Ministry and industrial stakeholders.

Demonstrating our products’ added value in the field

Our competition entry was prepared in collaboration with the Centre Mondial de l’Innovation Roullier and Dr. José Maria Garcia-Mina, Professor at the University of Navarre. Our entry won over the selection committee thanks to its innovative character and the development potential of the Top-Phos technology, in a market in which 80% of the soils are alkaline.

Timed to coincide with the competition entry, Top-Phos demonstration protocols were implemented by the CMI and the Canadian subsidiary at the beginning of the year in Saskatchewan; the objective being to demonstrate the added value of Top-Phos technology for canola, and also to study the favourable impact of our biostimulants in Canadian regions that experience the highest levels of climate stress (cold, drought, etc.).

Top-Phos provides the specific advantage of protecting Phosphorus present in the soil against the adverse phenomenon of “lockup” – thanks to Top-Phos, Phosphorus uptake is improved in both acidic and alkaline soils.